The key to performance in the armed forces

The operational environment involves a wide range of actors, capacities areas of action and intervention, and often unpredictable situations. All stakeholders must be prepared to observe, share and analyze complex situations and take action based on full understanding of instructions and procedures.

CS GROUP has developed solutions that enhance tactical readiness by immersing armed forces personnel in relevant tactical situations and by providing them with all they need to hone their skills and enhance their preparedness.

These solutions, selected for the French Army and Air Force, rely on software components developed by DIGINEXT, part of CS GROUP, which are deployed internationally in the fields of tactical data links and simulation.

CS GROUP, a major player in these sectors, offers:

Our simulation solutions are “network-centered” and natively take account of exchange capacities via standardized or simulated Tactical Data Links (TDLs). Simulated entities thus contribute fully to the development of a complete tactical situation and are able to respond automatically to missions assigned by operators via TDLs. Environments enriched in this way allow graded training sessions in conditions that are as close as possible to reality.

Our solutions rely on service-oriented architecture and standards-compliant interfaces that facilitate upgrades and integration with third party systems.

Designed by ergonomists, our training solutions take operational constraints and processes into account and are easy to learn to use. Their automation relieves operators of tasks with little added value.

Simplified implementation thanks to automated behaviors

By putting in place innovative modeling methods for both systems and human behavior, our solutions automatically take into account the actions of friendly or enemy units, which means that the balance and pace of the training are preserved.

LVC training features real actors using real resources (Live) or simulators (Virtual) within simulation environments where the actors are simulated (Constructive). Our tactical training centers provide the means for training on critical or dangerous missions at reasonable cost, thanks to the simulation of resources that it would be complex, costly or dangerous to use in reality.

Our training centers comprise a series of cells that make it possible to prepare, run, supervise and analyze / replay / report on exercises. These cells are armed by DIGINEXT software, ensuring a high level of coherence between the tools and making them easy to learn to use. 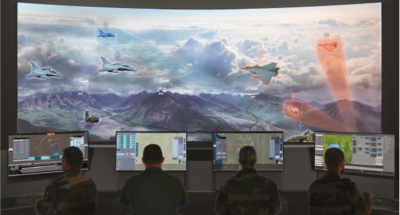 SOLSTICE is the software solution for the tactical in-service training of the French Air Force.

SOLSTICE combines the ability to run drills and carry out debriefing via the L16 tactical data link with Command and Control C² (StarlinX) and constructive simulation (DirectCGF) capacities. It generates and shares all types of tactical environments that are interoperable between Live and Constructive platforms. 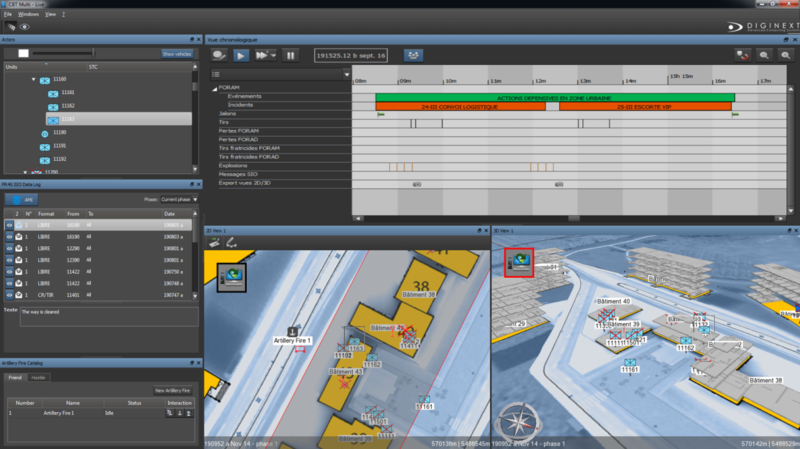 The RAINBOW suite is the software framework for the central system used in Live training centers operated by the French Army for urban and open areas.

The number of instrumented training is of the order of 3 SGTIA (sub Battle Group Inter-Arms) facing an enemy SGTIA, i.e. approximately one real time landing on a total of about 500 soldiers, to which is added the major equipment (Tank, Combat Vehicle, missiles, etc.). The trained populations include the levels below the Inter-Arms Battle Group, which remains present at the OC to “stimulate” its units on the ground. Each infantryman, vehicle and weapon system of the infantry, cavalry, artillery and engineer units present is instrumented and potentially digitised. RAINBOW also manages the simulation of artillery effects (artillery fire) and mined areas.

RAINBOW centralizes, records, enriches and re-visualizes information from field instruments, ensuring that the exercise is properly carried out and providing range of combat refereeing, security, analysis and debriefing options. 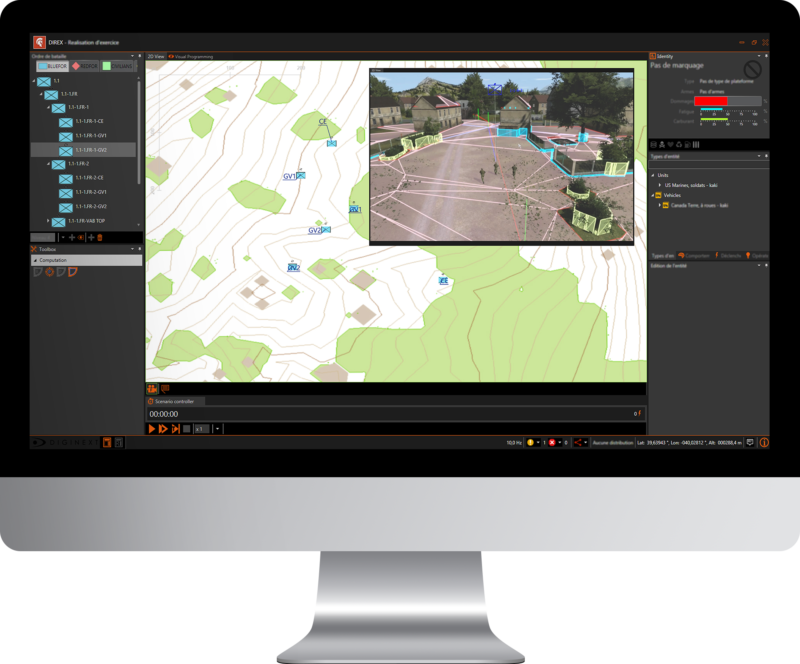 The HEROES suite is a complete training solution based on virtual and constructive simulation and artificial intelligence selected for the tactical operational training of the French Army.

Trainees include regiments, sections/platoons, groups and combat in a native inter-armed forces and possibly inter-army environment.

HEROES allows personnel to prepare for and execute exercises in local or distributed networks on dozens of devices, recreating the resources and capacities of operators in 2D and 3D. All the data is recorded (status of entities, voice, video) so that it can be played back and analyzed using powerful post-action tools.

Our Virtual Tactical Training Cells are designed to be used in a Virtual or LVC training center. 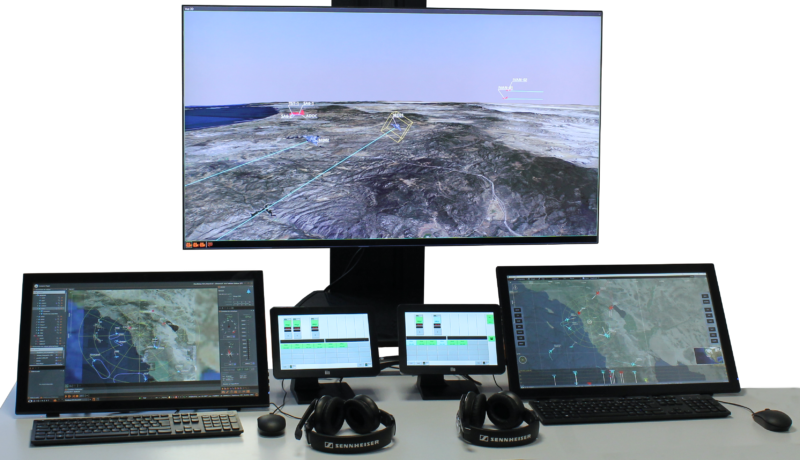 The FC-Trainer uses 5 major modules that make up the architecture of the training system, depending on quantitative goals (number of trainees), the level of the session, and also the number of sessions active at once. 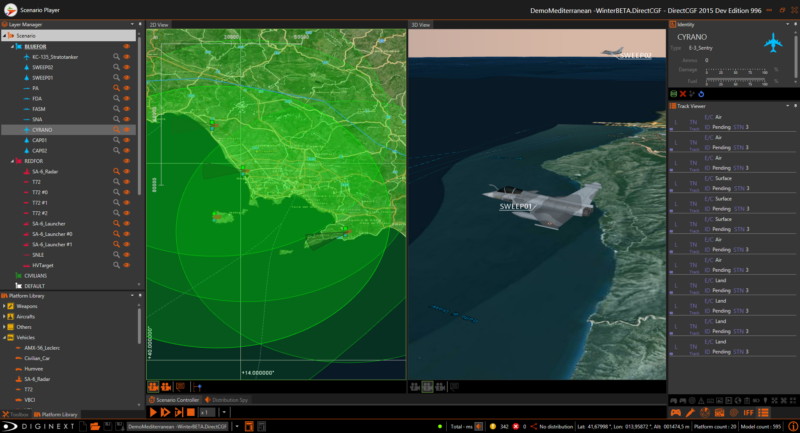 Its modularity and use of standards make it possible to set up AirC2 Trainer depending on the number of trainers or trainees and also to connect the system to other connected simulations (aircraft, helicopters, drones, surface-to-air missiles, Control centers and so on).

UAV-X is a training solution designed for the tactical training of drone crews (tactical operators and pilots).

A UAV-X simulator offers up to three posts: pilot, operator and instructor, and thanks to networking can provide training that involves squadrons of several drones.

Used by the French Air Force and several European nations, UAV-X makes it possible to simulate both MALE and tactical drones. It offers interoperability with other simulators and with operators along the chain of command via tactical data links.

Our Virtual Tactical Training Cells are designed to be used in a Virtual or LVC training center.

DIRECTCGF is the constructive arm of our training systems. It is a software package that generates tactical situations and make it possible to create, configure and easily execute scenarios involving different types of platforms.

The platforms include numerical models that simulate their capacities: movements, detections, weapons and jamming systems, means of communication, etc. DirectCGF implements artificial agents with configurable automatic behaviors using visual programming techniques that make it possible to create elaborate scenarios. As well as being the constructive core of our training systems, the simulation capabilities of DirectCGF make it possible to assess the performance and policy of use of future weapons systems.

DirectCGF is interoperable with other simulators via DIS and HLA standards. It also has simulation capabilities that allow it to participate in Tactical Data Link networks. 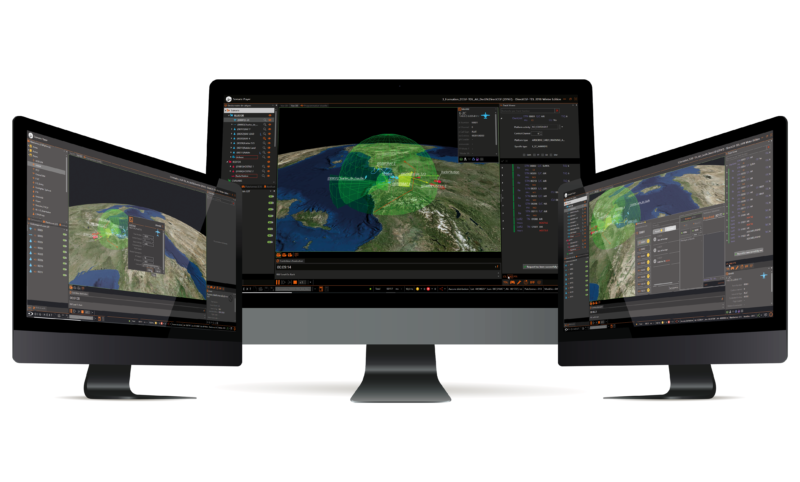 This solution comprises a set of tools for the post-action analysis of simulation exercises.