The CS Board, which met on 5 april 2019 under the chairmanship of Mr Yazid Sabeg, approved the consolidated accounts for 2018. 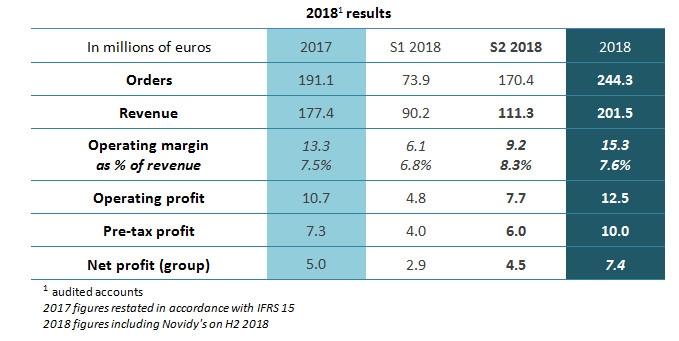 The group recorded growth of nearly 6% compared to FY 2017 and order intake increased by more than 40%, including the signature of a major contract for the IP migration of the French military air traffic control ground-to-air radiocommunication system. The book-to-bill ratio is 140%.

The momentum is favourable in all strategic segments of this activity, particularly in the field of anti-UAV, where CS has the only operational system, successfully qualified by the French Armed Forces (MILAD project).

In the space sector, the group is pursuing its European development, strengthened by the acquisition at the beginning of 2019 of Moltek, a company present in Germany and the Netherlands. The group confirms its breakthrough in the field of Navigation (EGNOS program) and reinforces its expertise in the field of Artificial Intelligence with the winning of the Earth Signature project for the European Space Agency.

Operating profitability was stable at 10% of revenue.

This activity continues to grow in France with a Book-to-bill ratio of more than 100% and a 7.6% increase in revenue, driven by projects in the field of digital continuity, particularly in predictive maintenance, and in the field of secure systems, combining safety and security.

The diversification undertaken in North America with new customers in the aeronautics and automotive sectors is beginning to produce results in H2 2018, even if it does not yet offset the previously expected and announced decline in business at Pratt & Whitney.

The operating margin increased by 2.2 points.

Sales increased by 8.6% and the book-to-bill ratio remained on a positive trend at 107%. Diginext confirms its leadership in the field of Tactical Data Links and Force Training, as demonstrated by the positive feedback from participation in world trade fairs (ITSEC, IDLS, IDEX), as well as the winning of a tactical data link project for export and the implementation of JEANNETTE projects, for Joint L16 training and SURICATE, a multi tactical data links supervision system.

With the acquisition of Novidy’s, the cybersecurity business now represents more than 20% of the Group’s total activities. Novidy’s performance in the second half of 2018 is in line with that of previous years, with organic revenue growth of 11.8% (compared to H2 2017) and an operating margin of 9.6%. The overall momentum in this strategic segment is positive with a book-to-bill ratio of 108% and the signing of new contracts, notably at Lisi Group, Safran, Airbus, Caisse d’Epargne and CNES. The integration of CS’s cybersecurity activities is underway and the synergy with the other activities of the group is started to show its first effects.

Prospects
The 2018 performances are in line with the objectives of the Ambition 2021 Plan. As a reminder, this plan aims at generating, over 3 years, a turnover of €300 million and an operating margin of 8%, through organic development and external growth targeted at the Defence & Security, Space and Cybersecurity sectors. Significant milestones were reached with the acquisition of Novidy’s and the €11.5 million capital increase in 2018 and the acquisition of Moltek in early 2019. In parallel, the group initiated projects whose mission was to accelerate the dynamics of implementation of this plan.
The Board of Directors will propose at the Annual General Meeting of June 14, 2019 the payment of a dividend of € 0.04 per share.

*Organic growth = variation integrating Novidy’s activity in H2 2017 & H2 2018
** As defined in the glossary of the presentation to analysts available on the Group’s website: www.c-s.fr

Publication précédenteModernization of the ATC centers of 25 french regional airports, CS is deploying its Voice Communication SystemsPublication suivanteThe CS Group, a major player in the French air defence programme SCCOA (System for Command and Control of Aerospace Operations), has been selected by DGA for the “Full IP” migration of the ground-to-air radio communication system.
We use cookies which are essential for you to access our website and/or to provide you with our services, and allow us to measure and improve the performance of our website. For more information, see our Privacy policy. To set up cookies go to Cookies settings
ACCEPT ALL REJECT ALL
Manage consent